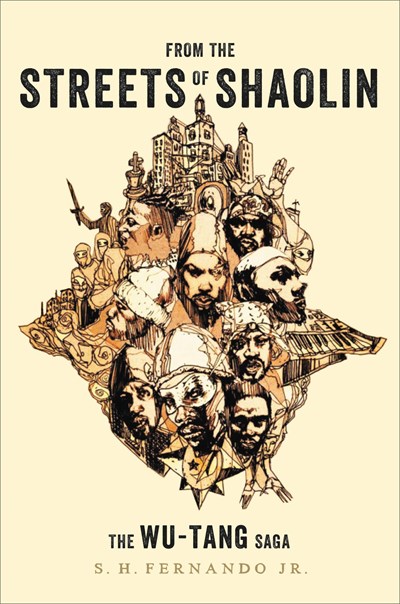 From the Streets of Shaolin : The Wu-Tang Saga

This is the definitive biography of rap supergroup and cultural icons, Wu-Tang Clan (WTC). Heralded as one of the most influential groups in modern music—hip hop or otherwise—WTC created a rap dynasty on the strength of seven gold and platinum albums that launched the careers of such famous rappers as RZA, GZA, Ol’ Dirty Bastard, Raekwon, Ghostface Killah, Method Man, and more. During the ‘90s, they ushered in a hip-hop renaissance, rescuing rap from the corporate suites and bringing it back to the gritty streets where it started. In the process they changed the way business was conducted in an industry known for exploiting artists. Creatively, Wu-Tang pushed the boundaries of the artform dedicating themselves to lyrical mastery and sonic innovation, and one would be hard pressed to find a group who’s had a bigger impact on the evolution of hip hop.

S.H. Fernando Jr., a veteran music journalist who spent a significant amount of time with The Clan during their heyday of the ‘90s, has written extensively about the group for such publications as Rolling Stone, Vibe, and The Source. Over the years he has built up a formidable Wu-Tang archive that  includes pages of unpublished interviews, videos of the group in action in the studio, and several notepads of accumulated memories and observations. Using such exclusive access as well as the wealth of open-source material, Fernando reconstructs the genesis and evolution of the group, delving into their unique ideology and range of influences, and detailing exactly how they changed the game and established a legacy that continues to this day. The book provides a startling portrait of overcoming adversity through self-empowerment and brotherhood, giving us unparalleled insights into what makes these nine young men from the ghetto tick. While celebrating the myriad accomplishments of The Clan, the book doesn’t shy away from controversy—we’re also privy to stories from their childhoods in the crack-infested hallways of Staten Island housing projects, stints in Rikers for gun possession, and million-dollar contracts that led to recklessness and drug overdoses (including Ol’ Dirty Bastard’s untimely death). More than simply a history of a single group, this book tells the story of a musical and cultural shift that started on the streets of Shaolin (Staten Island) and quickly spread around the world.

Be the first to review “From the Streets of Shaolin : The Wu-Tang Saga” Cancel reply