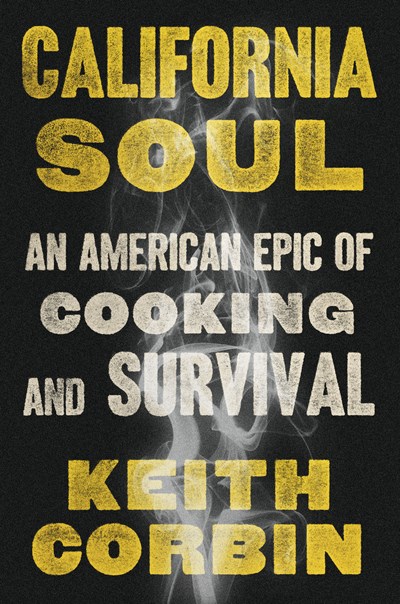 California Soul: An American Epic of Cooking and Survival

One way or another, Chef Keith Corbin has been cooking almost his entire life. Born in Watts in 1980, he grew up in the Jordan Downs Projects, home turf of the notorious Grape Street Watts Crips. At age thirteen, during the peak of America’s lurid fascination with LA gang culture, Corbin learned to cook crack, becoming so skilled that he’d be flown across the country to cook for drug operations in other cities. Once his criminal enterprises caught up with him, Corbin spent ten years in some of California’s most notorious maximum security prisons. Witnessing the resourcefulness of other inmates making kimchi out of leftover vegetables, and tamales from ground up Fritos, he developed his own culinary palate and ingenuity, creating “spreads” out of the normally unbearable commissary diet, and experimenting during his shifts in the prison kitchen.

After release, Corbin was hired as a kitchen manager at Locol, an ambitious, heavily hyped restaurant by celebrity chefs Roy Choi and Daniel Patterson meant to bring inexpensive, chef-quality meals and jobs into underserved neighborhoods. Suddenly thrust into the spotlight, Corbin struggled to live up to or accept the simplified “gangbanger redemption” portrayal of him in the media. Battling drug addiction and a seemingly unstoppable barrage of violent tragedies, Corbin rose to become chef of Alta West Adams, seeing his vision of “California Soul Food” (a healthier, creative spin on soul food using local California produce and West African cooking techniques) become a reality as Alta gained national media recognition as one of the nation’s best new restaurants.

With nuance and startling clarity, California Soul takes us through the worlds of gang hierarchies, drug dealing, prison politics, gentrification, and culinary prowess. Corbin tells the story of what it’s like to grow up Black in America under some of the worst circumstances; to see unspeakable tragedy and commit acts of violence, to get locked up, and re-locked up, to attempt to go straight and find the system unforgiving, to find a culinary passion and go for it, to succeed and fail, and be forced to fight for your place at the table.

Be the first to review “California Soul: An American Epic of Cooking and Survival” Cancel reply